There was so much about MBCA \ Alabama Section's Heimatfest to share, not quite sure where to start. 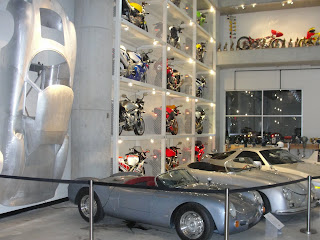 First of all the Barber Motorsports Park and Museum is a magnificent place, be sure to make a note to visit it if you are anywhere near Birmingham Alabama.  The facility is pristine and maintained to top standards that even a non automotive or motorcycle enthusiast would appreciate.  The park with its 2.38 mile long road track is a delight to drive, and the Barber Museum is a wonderful facility packed to the brim with artifacts of the motorsports world. 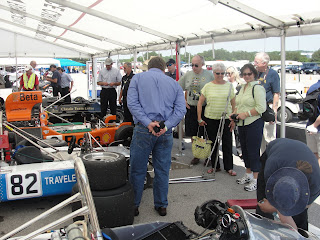 Friday was the first day and it was a great opportunity to spend time in the paddock and visit with the Legends of Motorsports race teams.  The group got an opportunity to have a one-on-one tour and visit a number of the different crews working on the cars as they were in under the tents for mechanical adjustments between practice races.  For those of us who do not have the background knowledge of vintage racing this was a great primer on these historic vehicles.  They are not just race cars, but handmade works of art that are passed from one to another to preserve them for the future.


Having the chance to tour the mechanical shop areas and watch the practice laps got everyone interested in going out for the first of three parade laps that were held throughout the event.  Attendees lined up and drove about ten times around the track getting the chance to see the racers line and understand where the apexes were.   The lead follow was a great exercises, though for some of us who had driven tracks before it got a bit frustrating as the driver in front was not as experienced on the line as others were.  Here is a YouTube video of the first day's parade lap following Matt Johnson in his S2000  http://youtu.be/CMPCT3gEh6I


Later on that evening what has become a ritual for this event was the road rally to Mountain Brook Village.  Three groups of vehicles went out with full Police escort to drive to this quaint upscale village. YouTube video of the drive, complete with Police motorcyles and roads blocked off.  http://youtu.be/zCcYW58L_BY 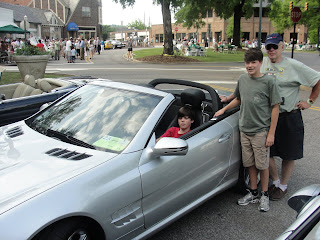 For members of the Mercedes-Benz Club of America we had reservations for dinner on the balcony over looking the town green at Avo.  This provided members a tree top view of the cars on display and the perfect place to watch the arrival and departure of the caravans of show and race cars.  The towns was decked out and prepared to celebrate the event in style, closing down the town green for this special event.  Kids joined seniors in discussion of the different cars.  One of the MBCA members was kind enough to allow several young guys an opportunity to sit in his SL550 AMG.  Saying that he remembered being a car crazed kid at their age, and how getting to feel and touch the cars of his dreams led him to be the car enthusiast he is today.

Saturday was an opportunity to meet and greet with other club members, as well as members of other clubs.  Because this was a vintage race, many people brought out their classic and historic cars, like Porsche 914's, which take me back to my teenage years, as well as some pretty impressive high performance Ferrari's and other exotics.  Of course a Lotus or two was always around, as they were well represented in the weekend's races and their club is very active in the Birmingham area. 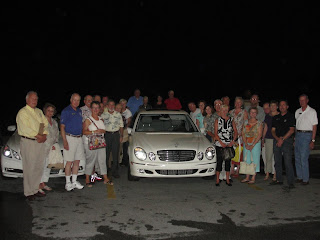 Another evening, meant another great dinner outing for MBCA members, this time at the Village Tavern at the Summit.  Where MBCA members had reserved parking to display their Mercedes-Benz vehicles together as a group.  So a great line of M-B's made for quite an impressive sight.  This was a great opportunity for the more than 40 diners to visit and share stories from their home sections and find connections with other members on topics from pets, to careers to models of M-B owned.  Special thanks go out to the valet staff at the Tavern for their help in placing the cars. 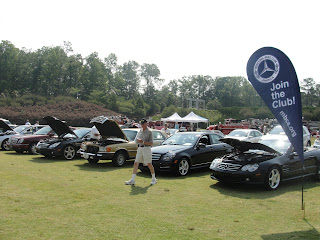 Sunday dawned, and MBCA members arrived early to prepare their cars for the Concours, a popular vote with four categories with three winners in each category.  The C300 that I had rented from Enterprise Rental at EuroMotorcars Bethesda came in third in the modern sedan category.  Quite an impressive array of Mercedes-Benz's were on display from a classic Adenauer to a CDI ML, from a speedy SLK55 owned by a young Alabama car crazed member to the E and S Class sedans. 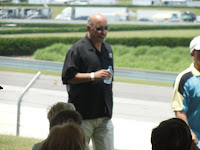 Part of the VIP experience was the chance to get to meet Bobby Rahal the founder of Legends of Motorsports and a racing legend himself in person.  Mr. Rahal took the time to stop by the car corral during the afternoon and visit with our members. He talked of his racing career, what membership in the car clubs meant to him, and shared some personal one-on-one time with those in the car corral.  A raffle was held during the event to raise funds for local tornado victims two of the raffle items were, a ride around the track with Mr. Rahal, and a Bobby Rahal signed helmet, that was won by one of our Central Georgia Members.
The reason that this MBCA event is called Heimatfest, is because that translates from German into "Home Festival" since Alabama is the home to the American made Mercedes-Benz, the ML all activity vehicle, the GL sport utility vehicle, the G Class an all around people mover and wagon and soon the new C Class will be made there in the Vance Alabama plant as well starting in the 2014 model year. 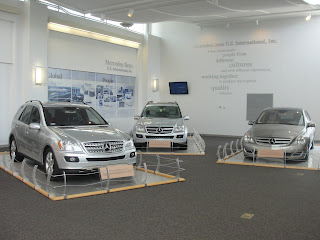 And no trip to the MBCA | Alabama Section would be complete without a visit to the plant.  So on Monday morning, the hearty arrived early for a 9am tour of plant one, to see the GL being produced.  Plant two was closed to the public as they are currently building the yet-to-be-released new W166 ML, due out later on this summer.  Along with this visit was also a chance to tour the small Mercedes-Benz museum that is located at the Plant's visitor's and training center.  This was a chance to see some of the history of the marque, not only here in America but throughout the world.
In all Heimatfest 2011 held during the Legends of Motorsports at Barber Motorsports Park was an overwhelming success, members, friends and potential members alike got to join together and share their passion for the Mercedes-Benz brand.
Posted by William West Hopper at 3:44 PM