Dinner on the House @ Uncle Julio's, Mexican Made From Scrach 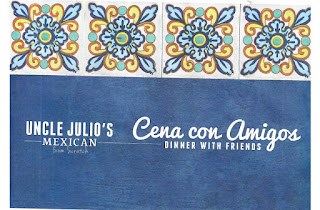 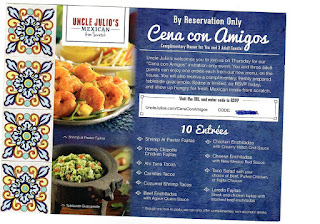 We got an invitation in the mail for Cena con Amigos, a complimentary dinner at Uncle Julio’s Mexican restaurant. And like anyone who is invited, we accepted, though wondering why a Mexican restaurant chain would invite us for a free dinner.

While our local Uncle Julio’s has been around for a while, it seems they are upping their game, with some new food and with their great service it was a chance to revisit a restaurant that we have not frequented in a few years.

This special event came with complimentary freshly prepared table side guacamole for our group of four, and our choice of ten entrees from Fajitas and tacos to taco salad and Enchilada, non-alcoholic beverages and a tasty though very doughy desert covered with powdered sugar and served with a honey dip. While the alcoholic drinks were our responsibility, we did get a chance to taste a fresh watermelon margarita, which was quite tasty, and will have to remember to order during the summer months. 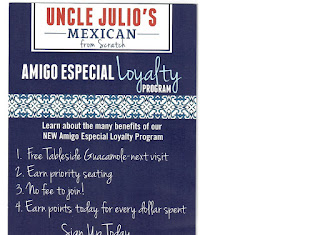 Our selected reservation time was later in the evening, 8pm, and the restaurant was lively, though not packed we were quickly shown to our seats. We got a booth by the window, which was great for our little foursome, larger tables are available for bigger groups, and the place is set up into multiple dining rooms and a lively bar area, so there is plenty of space. The interior is well appointed and maintained, not dominated by heavy decoration, as seen in some other Mexican restaurants.

At the end of our meal, the Manager stopped by to thank us for coming in for dinner, and introduced us to their Amigo Especial Loyalty Program. Giving us a card, which will be loaded with a $25 welcome credit for use the next time we stop in. The Amigo Especial Loyalty Program has a number of reward levels from free tableside Guacamole on your next visit, to credits towards complimentary dessert and an appetizer fiesta, as well as priority seating, all depending on the number of points you earn. 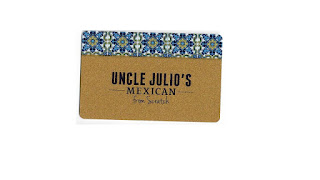 What’s next, for us it will be a regular stop when we are hankering for some good Mexican from Scratch, and tasty Margaritas. 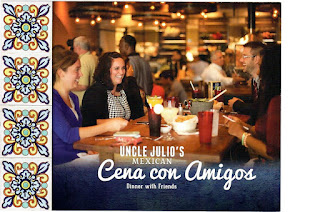 Posted by William West Hopper at 3:03 PM No comments: